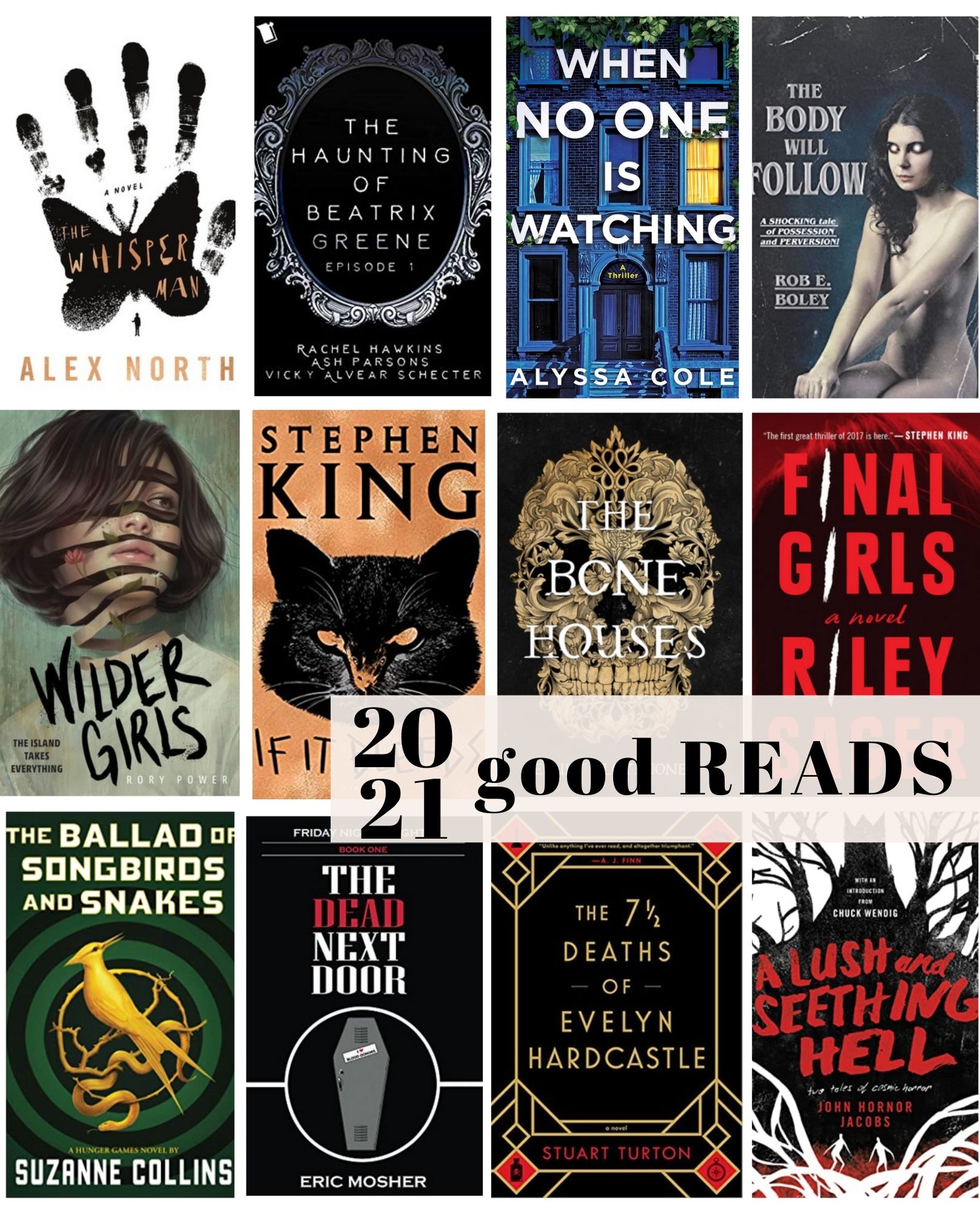 Hello party people and welcome to the blog.

It’s that time of year again.  What are you reading?  Every January for the past 3 years I’ve been committed to reading a set amount of books per year (this is not a resolution, but a revolution. LOL).

Reading is one of the best ways to expand your surroundings, learn something new, or it’s just plain ole fun to indulge in something you normally wouldn’t.

I love crime, mystery, some fantasy, biographies, and of course horror novels.  I left off in October with my last book review, so now I’m here to share that review as well as my reading challenge for 2021.

Last year I read about 12 books which may seem like a small number, but it’s good for a person like me who would only read about 3 books a year.  I’m proud of my 12.  I want to challenge myself to read 13 but hey…let’s not get too ambitious, and just get to 12.

I’ve been gifted one book, picked up 3 on black Friday, and have at least 3 more saved so I’m ready to hit the ground running. Thank you to Net Galley for providing my upcoming reading this year. 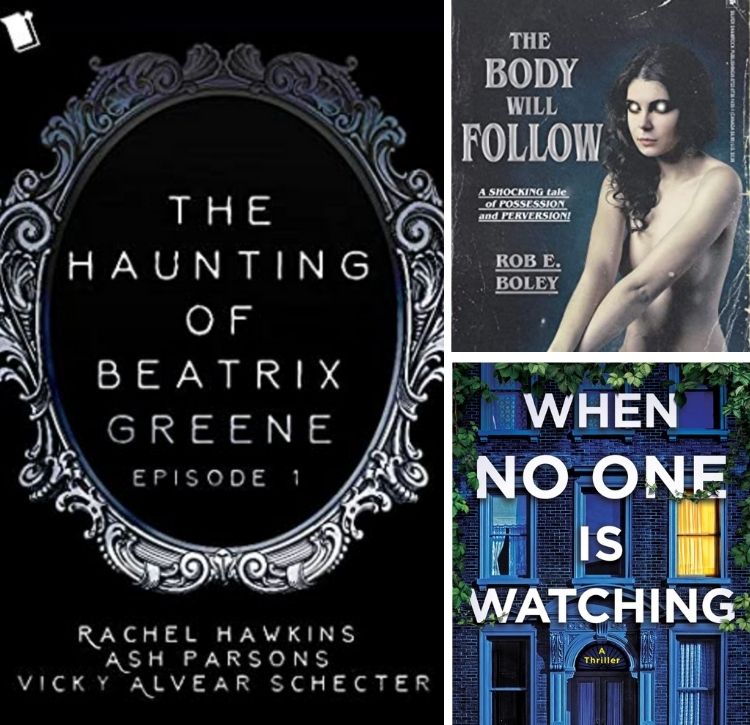 The Haunting of Beatrix Greene Episode 1, by Rachel Hawkins (3.75 Good Reads)
In Victorian England, a savvy spiritual medium must outsmart the most important client of her career: a scientist determined to expose frauds like her.

The Body Will Follow, by Rob E. Boley (3.52 Good Reads)
When Carrie reclaims her body after being possessed by a hedonistic gang of dark spirits, life as she knew it is over. Before, she was a thirty-something data analyst who enjoyed preparing vegetarian meals, decorating her vintage home, and training for marathons. Now, she’s lost everything – her savings, friends, career, and reputation. The police want to question her for an array of crimes. Homeless and diseased, she’s also the star of her own mortifying viral video.

When No One Is Watching, by Alyssa Cole (3.63 Good Reads)
Sydney Green is Brooklyn born and raised, but her beloved neighborhood seems to change every time she blinks. Condos are sprouting like weeds, FOR SALE signs are popping up overnight, and the neighbors she’s known all her life are disappearing. To hold onto her community’s past and present, Sydney channels her frustration into a walking tour and finds an unlikely and unwanted assistant in one of the new arrivals to the block—her neighbor Theo. 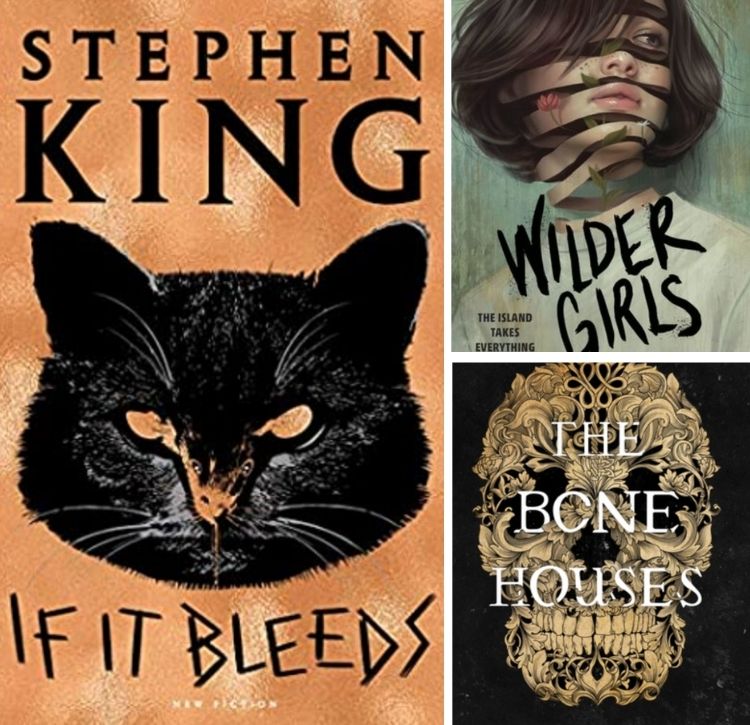 If It Bleeds, by Stephen King (4.08 Good Reads)
Holly Gibney of the Finders Keepers detective agency is working on the case of a missing dog – and on her own need to be more assertive – when she sees the footage on TV. But when she tunes in again, to the late-night report, she realizes there is something not quite right about the correspondent who was first on the scene. So begins ‘If It Bleeds’, a stand-alone sequel to The Outsider featuring the incomparable Holly on her first solo case.

Wilder Girls, by Rory Powers (3.56 Good Reads)
It’s been eighteen months since the Raxter School for Girls was put under quarantine. Since the Tox hit and pulled Hetty’s life out from under her.

It started slow. First, the teachers died one by one. Then it began to infect the students, turning their bodies strange and foreign. Now, cut off from the rest of the world and left to fend for themselves on their island home, the girls don’t dare wander outside the school’s fence, where the Tox has made the woods wild and dangerous. They wait for the cure they were promised as the Tox seeps into everything.

The Bone Houses, by Emily Lloyd-Jones (4.03 Good Reads)
Seventeen-year-old Aderyn (“Ryn”) only cares about two things: her family, and her family’s graveyard. And right now, both are in dire straits. Since the death of their parents, Ryn and her siblings have been scraping together a meager existence as gravediggers in the remote village of Colbren, which sits at the foot of a harsh and deadly mountain range that was once home to the fae. The problem with being a gravedigger in Colbren, though, is that the dead don’t always stay dead.

Final Girls, by Riley Sager (3.82 Good Reads)
Ten years ago, college student Quincy Carpenter went on vacation with five friends and came back alone, the only survivor of a horror movie–scale massacre. In an instant, she became a member of a club no one wants to belong to—a group of similar survivors known in the press as the Final Girls.

The Whisper Man, by Alex North (4.05 Good Reads)
After the sudden death of his wife, Tom Kennedy believes a fresh start will help him and his young son Jake heal. A new beginning, a new house, a new town. Featherbank.

A Lush and Seething Hell: Two Tales of Cosmic Horror, by John Hornor Jacobs (3.90 Good Reads)
A brilliant mix of the psychological and supernatural, blending the acute insight of Roberto Bolaño and the eerie imagination of H. P. Lovecraft, The Sea Dreams It Is the Sky examines life in a South American dictatorship. Centered on the journal of a poet-in-exile and his failed attempts at translating a maddening text, it is told by a young woman trying to come to grips with a country that nearly devoured itself. 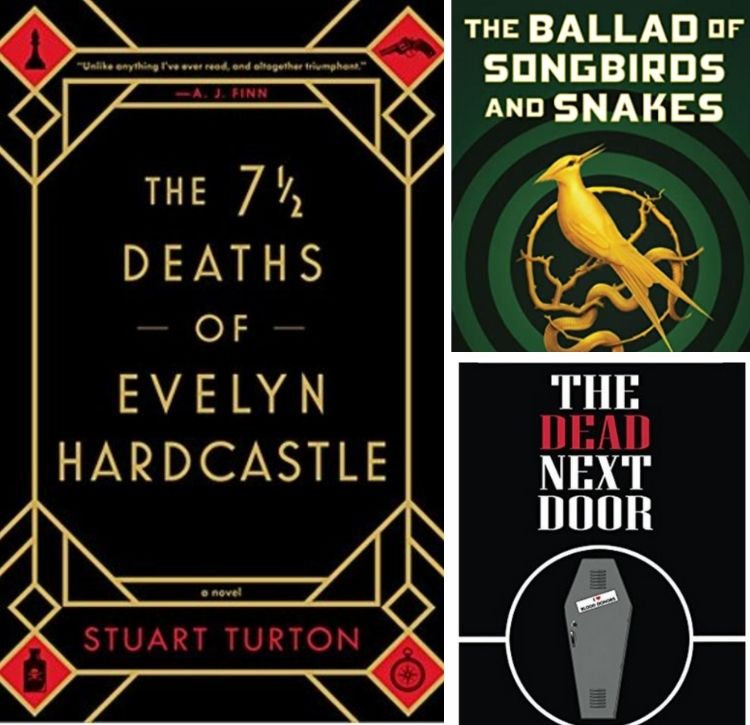 The 7½ Deaths of Evelyn Hardcastle, by Stuart Turton (3.89 Good Reads)
Aiden Bishop knows the rules. Evelyn Hardcastle will die every day until he can identify her killer and break the cycle. But every time the day begins again, Aiden wakes up in the body of a different guest at Blackheath Manor. And some of his hosts are more helpful than others. With a locked room mystery that Agatha Christie would envy, Stuart Turton unfurls a breakneck novel of intrigue and suspense.

The Ballad of Songbirds and Snakes (The Hunger Games #0) by Suzanne Collins (3.81 Good Reads)
It is the morning of the reaping that will kick off the tenth annual Hunger Games. In the Capitol, eighteen-year-old Coriolanus Snow is preparing for his one shot at glory as a mentor in the Games. The once-mighty house of Snow has fallen on hard times, its fate hanging on the slender chance that Coriolanus will be able to outcharm, outwit, and outmaneuver his fellow students to mentor the winning tribute.

The Dead Next Door (Friday Night Frights Book 1), by Eric Mosher (4.08 Good Reads)
For David Gale, high school has suddenly turned deadly when the newest student turns out to be a vampire. Even worse, his family has moved into the old creepy house across the street! With classmates dropping like flies and an undead plague threatening to engulf the whole town, the prospects of surviving until graduation look slim and the salvation of Smith’s Grove is up to three reluctant heroes.

Do you have a reading list this year?  If so, what are you reading?  hare it down in the comments.  Thanks for visiting today. — peace —